To protect the future of the Olympics, we believe a fundamental rethink is needed on how the Games are organised and how ‘leaving a legacy’ is delivered in practice.

Legacy is no longer a ‘nice to have’. Legacy is the long-term return on investment for cities, and is a fundamental part of making the business case for hosting a major event.

Portas Consulting has been involved in Olympic Games legacy planning since 2004, when its founder David Portas played a leading role in developing the legacy strategy for London 2012. The company has since developed distinctive insights on the drivers of successful legacy strategy and implementation.

Legacy is no longer a ‘nice to have’. Legacy is the long-term return on investment for cities, and is a fundamental part of making the business case for hosting a major event. As the cost of hosting the Games continues to rise, cities will stop bidding if the sums cannot be made to work. In extremis, no host cities mean no Games.

Portas has conducted an evaluation of the legacies of all summer Games since 1992 to determine their quantifiable impact and what makes for legacy success.

Our analysis clearly shows that no summer Olympics in recent decades has managed to fulfil its potential on legacy. Delivering both a spectacular event and a truly compelling legacy remains a massive challenge. It should come as no surprise that many host cities have fallen short in meeting it given how Organising Committees are set up.

To protect the future of the Olympics, we believe a fundamental rethink is needed on how the Games are organised and how ‘leaving a legacy’ is delivered in practice.

No legacy, no Olympics

Tokyo 1964 is a notable example of the Olympic Games delivering a nation-changing legacy for generations. Barcelona achieved the same for the city in 1992.

By 2005 legacy had become the key battleground for bidding cities. London won by making legacy the centrepiece of a complete proposal that had meaning to the IOC, the Olympic movement, the people of London, and the British nation.

As Tessa Jowell said at the time, “the prize is the greatest in a generation…the chance to turn the rhetoric of legacy into fact. Faster progress towards a healthy nation. Higher aspirations for young people in their work and their play. A stronger community.” Indeed, 2005 ushered in what Portas phrased at the time as the “Golden Decade of Sport” for the UK.

An entirely different story around Olympic legacy is now emerging however. It doesn’t make enjoyable reading for the IOC or for potential future host cities. It says that the real Olympic legacy is unsustainable debt, unproductive infrastructure and a socio-economic burden to bear for generations to come. This narrative is causing cities to rethink the value of the Games, and retreat from bidding. What should be a competition for a golden opportunity is in danger of turning into a reluctant duty for richer countries.

Three factors seem to be contributing to this shift.

First, the bidding game is becoming very expensive. As well as the cost of putting bids together, the very nature of the competition forces cities to develop increasingly extravagant plans. These raise expectations and invariably lead to higher budgets.

Second, the cost of hosting a Games usually exceeds the budget – sometimes spectacularly. One assessment by Time Magazine estimated that every Games since 1960 has overrun its budget by an average of 179%.1

Third, failing to deliver a positive legacy is not just an opportunity cost: it has material consequences. Old infrastructure costs money to maintain even if it is unused, and private sector contracts need to be honoured. Simply maintaining the underused venues from Athens 2004 cost an estimated £500 million in the first four years alone.2

The only rational reason therefore for any city to invest in a Games is a belief that the legacy will produce a return on the investment that significantly outweighs the cost of hosting. No legacy means no investment case for bids. No bidding cities could mean no Olympics – at least not as we know it.

Why is leaving a positive legacy such a challenge and what can we do to fix it? To help answer that question, Portas has carried out an in-depth study to analyse the nature and drivers of legacy.

First, we defined legacy along four dimensions: (1) economic, (2) infrastructure, (3) social and (4) sporting, and identified a series of Key Performance Indicators (KPIs) in each category. Thinking on legacy often stops with the ‘hard’ aspects of economics and infrastructure, but it is the ‘soft’ social and sporting elements that will sustain long term change.

Second, we identified three critical time periods of activity in the Olympic Legacy Lifecycle: (1) the initial period after winning the bid, (2) the ramp-up period before the Games itself, and (3) the post-Games period. 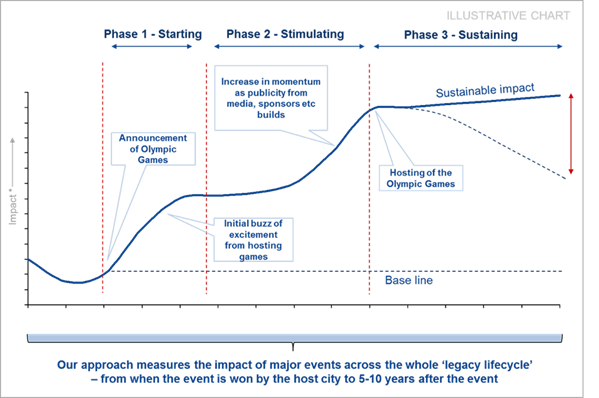 No one is a superstar

Our analysis underlined that no Olympic host city over the past quarter century has delivered a superstar legacy performance. While London and Sydney lead the pack, no city scored more than 62% overall. It shows there is still a huge untapped surplus in legacy value that has not been captured. Cities with relatively low scores often failed to capture the ‘easy wins’ of using facilities and infrastructure improvements that the Games directly provided. Establishing and using data and technology e.g. for ticketing or customer engagement (the best available at the time of each games) to enable legacy also remains an area which previous Games have particularly struggled with. As technology advances, this is a major opportunity for organising committees. 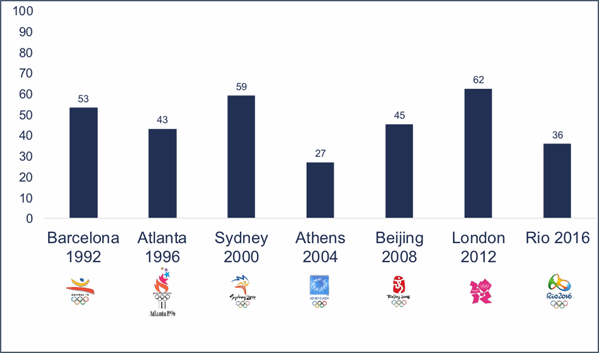 Successful athletes always improve their performance over time. If this was also true of host cities then the legacy achieved by each Games would be better than the last. But this is not what our analysis shows. Instead there is an inconsistent picture.

It means unfortunately there is little evidence to suggest that cities are learning effectively from their predecessors. Success on legacy instead appears to correlate to overall national economic and administrative capacity.

Clearly there have been costly mistakes and there are better ways for future host cities to learn from these errors and build on the successes of the past. The IOC successfully runs conferences, shares data and insights. There is also an army of advisors – usually former employees of OCOGs – who fly around the world sharing their experiences. In the words of one of the sports leaders we recently interviewed however, this type of expertise is often neither “relevant, sustainable, nor ground-breaking”.

While capturing it may remain a challenge, there is plenty of surplus value that can be secured. The current best in class mark of 62% according to the Portas Legacy Score means there is still lots of runway yet to be utilised. Indeed, if we take the best scoring cities from each category, the combined score would already be 68%. There is plenty to build on:

London scored well on economic legacy – mainly due to the redevelopment of East London. Over four million square feet of offices were developed, creating the potential for as many as 25,000 jobs within the area. Government analysis estimates the economic impact to be between £28 billion and £40 billon Gross Value Added by 2020.3

Sydney delivered well on sporting legacy, which included successfully building a long-term sporting workforce. At the time 47,000 volunteers helped deliver the Sydney Games, broadening the scope of volunteering in people’s minds for future events and creating an army of volunteers worth as much as US$140 million, according to Sydney estimates.4

Beijing successfully leveraged the Games for social impact, using the momentum of the Olympic build-up to connect with communities around China. A joint educational programme on Olympic values and sport was implemented across 400,000 schools, whilst a further 200 schools in Beijing partnered with schools in other countries for cultural exchange.5

We should not be surprised by the overall underperformance on legacy. Given the diversity of circumstances and approaches for each Games, it would in fact be more surprising if there was a consistently high performance.

If we consider London 2012, which by our assessment and popular opinion delivered the most successful legacy of recent times, two organisations were created and tasked to deliver the Games: The London 2012 Organising

Committee (LOCOG) for the delivery of the Games themselves; and the Olympic Delivery Authority (ODA) for the infrastructure build. It is clearly evident (in the mandate, incentives, skills, capacity, priorities, resourcing and organisational set-up of both entities) that they were geared for delivering one off products – be it infrastructure or events.

Legacy on the other hand is anything but a one-off deliverable. It is long-term, strategic, and generational in outcome. It needs to be all-encompassing in approach, covering all the economic, social, sporting and infrastructural dimensions, working together with a multitude of stakeholders. The type of organisation required to deliver the Olympic legacy is entirely different to those required by an OCOG, and to expect anything else is simply unrealistic.

In London’s case, there was a recognition that legacy required a different organisation and the responsibility went to the Greater London Authority, essentially London’s municipal government. While the GLA had some of the characteristics needed to own and deliver the legacy, a business-as-usual organisation responsible for running a city was always going to be diluted in its efforts to deliver the Olympic legacy. Also, the London Legacy Development Corporation (LLDC) is only focused on the development of the Olympic Park. However, these do nonetheless point towards a new solution.

Time for an OCOL?

Our belief is that systemic issues mean the traditional organisational models for delivering a Games are not likely to deliver a successful legacy. We should stop expecting them to. It is often said that doing the same thing repeatedly and expecting different result is the very definition of insanity. If we want to get Olympic legacy right, we must be prepared to do things differently.

We believe there is a need to establish an Organising Committee for the Olympic Legacy (OCOL). This new and separate organisation would sit alongside the OCOG, directly under the leadership and accountability of an Olympic Board:

There are several important differences that an OCOL could make:

We advocate four steps to making this a reality:

Naturally these thoughts only serve as an initial proposal for how we should respond to the major challenge facing the Olympic movement. We recognise we may be guilty of skimming the surface of much deeper issues and that our suggested steps may raise further questions. Our hope is that this provokes a wider discussion about the best way to answer them.

Shakespeare once wrote that “no legacy is so rich as honesty” – and just as we are open about the limits of our solution, we must be truthful about what is at stake if a solution is not found. Our analysis still points to the spectre of a world without the Olympics unless there is a fundamental shift away from a cycle of Games that cost too much and deliver too few benefits after the show has left town. A deeper understanding and better articulation of the business case for Olympic legacy holds the key. It is time to start doing things differently.

[1] Time Magazine “It Wasn't Always So Expensive to Host the Olympics. Here's What Changed” July 2016

[2] The Independent “After The Party: What happens when the Olympics leave town” August 2008

[3] McKinsey & Co “Learning from experience: How hosting the Olympics can leave a positive legacy” February 2017