Fixing Federations: Breaking the vicious cycle of the status quo

A vicious cycle of the status quo – driven by entrenched habits, operational pitfalls and internal politics – is preventing sports federations from making the changes needed to successfully deliver their mandate. However, this vicious cycle can be broken by employing a sustainable operating model, implemented through changes that are targeted, comprehensive and driven from within.

THE VICIOUS CYCLE OF THE STATUS QUO

Times are tough for sports federations in the UK. On one hand they face greater competition than ever for their participants' time, while on the other Government funding is dwindling and ever harder to access. UK Sport is funding fewer than half of the Olympic sports for Tokyo 2020, compared to 70% for London 2012. Capturing available funds is no easy task - recently, Table Tennis England’s future was put at risk following a suspension of £9 million for not meeting the governance standard. The writing is on the wall. To survive, federations will need to fundamentally rethink how they operate.

Change however is difficult, and in the UK, many federations are struggling to transform due to three main challenges: 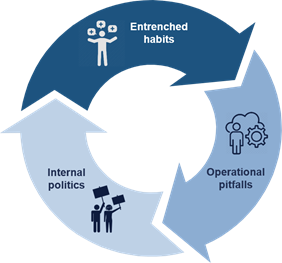 These challenges can then reinforce each other, leading to a vicious cycle: entrenched behaviours mean that the federation fails to adapt to the changing market. The ensuing operational underperformance in turn drives dissatisfaction within the sport, further fuelling division and resistance to change. Over time, this leaves the federation struggling to perform, and at worst, can threaten its very existence.

The most effective way to break this cycle is by putting in place a new operating model that simultaneously addresses each negative dynamic.  By “operating model” we are referring to all the building blocks that make up the overall system for enabling the delivery of the federation’s work. These typically fall into the categories of governance, operations and organisation.

The key lies in the fact that an operating model is a single, coherent system that can directly affect all three areas driving the vicious cycle. Therefore by putting in place the right model, it is possible to transform each challenge into a positive reinforcement cycle:

While designing a sustainable operating model that can break the cycle is not easy, putting it into practice is even harder - especially when resistance to change is part of the problem. Success requires seeing implementation as a long-term, transformative, change management initiative rather than a short-term set of fixes. Our experience of working with over 20 UK federations points to three key success factors:

Target changes that matter most

It is critical to get early momentum that kick-starts the transformation and achieves buy-in for longer-term change. Leaders need to prioritise areas with the greatest demand for improvement and the biggest potential for impact. For example, one of the UK’s most popular sports started its transformation by focusing on reforming its regional structure. By replacing a functionally siloed model with a single regional leadership model, the federation was able to generate quick impact, high visibility and political capital – setting it on the right path to win the transformation marathon.

Drive change from within

Change can only stick when it becomes ‘the new way of life’ rooted in social norms and shared values. This cultural change is often the most difficult part of an operating model transformation, particularly in highly politicised sports. It starts by establishing the right values and is underpinned by clear understanding and commitment from the entire organisation. Once there is alignment, federations need to upskill their employees to enable them to behave in the new way rather than follow the same old entrenched habits. For example, a smaller-sized federation was unable to implement a new vision due to capability gaps in its staff. Rather than recruit an entire new organisation, the Board decided to invest in its management team by providing individually tailored training.

Change at HQ level is not sufficient to change the sport. Change needs to be led from the top, but to truly embed the new operating model, it needs to be complimented by solutions that change the activities and behaviours happening on the ground. For example, in another medium sized participation sport, despite the strong commitment of the leadership and positive initial steps, the transformation arguably caused more harm than good due to a lack of communication across the sport’s landscape. This simply fuelled the lack of trust and suspicion, strengthened the conflicting political agendas, and derailed the transformation.

Most federations fail to recognise the significance of a sustainable operating model or the difficulty of undergoing a transformation. According to McKinsey research, 70% of transformations fail to achieve their stated goals. However, getting the operating model right is no longer a “nice-to-have” - it is a necessity for survival in the current landscape of increased competition and reduced funding. Consequences can be catastrophic for sports that get this wrong. For example, two inefficiently run smaller sports have seen a 30% decline in the number of participants between 2006 and 2016 – a similar level of decline across all sports would have a material impact on a country’s economic, social and health performance.

More importantly, getting the operating model right also presents an opportunity to significantly grow participation across all sports. Even those federations who are well-run are only reaching a small portion of their participant market: one of the most popular sports has a membership that covers less than 10% of regular participants. Transforming operating models is hard, but by focussing on the right things, it is possible to get it right – and the prize is bigger than just survival.