There currently exists a participation inequality defined by gender, with men increasingly active compared to women (1). This disparity can lead to differences in both short and long-term health outcomes, thus creating a social gradient in health described by Public Health England as the result of an ‘un-level playing field’ (2). By understanding the complex underlying factors hindering female physical activity, we can design suitable interventions that work where they’re needed most. Only then will we begin to level the playing field and realise significant health and social benefits across society.

In England, 20% of boys aged 5-16 are active for 60+ minutes every day compared to just 14% of girls. This gender gap is maintained throughout adulthood, with an average of 5% more men than women reaching the WHO’s recommended 150 minutes of physical activity per week (1).

Our ongoing Active Citizens Worldwide initiative  has demonstrated the range of economic, health and social outcomes that result from being physically active as an adult. We have also previously discussed the importance of habit formation in youth, particularly with regards to establishing lifelong habits in physical activity. In addition to the short-term impact of lower participation in girls – such as on confidence or educational attainment at school – there are further long-term implications in adulthood if we don’t reduce this inequality from a young age. There is therefore an urgent need to focus our efforts on increasing participation in both women and girls if we are to realise the full range of benefits for society.

Research conducted as part of our Women in Sport work has identified various drivers behind this participation inequality, from anthropological to structural. Rather than a ‘one size fits all’ approach, the most effective way to reduce the gender gap is to design bespoke interventions focused on tackling specific factors hindering female participation. Here, we outline a few of these factors and highlight some of the innovative ways they are being addressed.

1. Use marketing to break down social stigmas

Social pressures concerning ‘normative’ body types are often referenced as preventing women from wanting to exercise. This is no doubt one of the reasons behind the decline seen in female physical activity from primary to secondary school – at ages 11-13, one in four girls have reported being unhappy with their body image, increasing to one in three by the age of 14-16 (3).

These social pressures reinforce a less publicised and understood phenomenon, ingrained cognitive binaries. These define gender by an array of expectations as to how one should perform – a theory known as ‘technologies of the self’ (4). Young girls may associate physical activity and sport with masculine performance, leading them to believe that, as a female, they are not physically capable of participating. This association can continue into adulthood, limiting female participation at all ages.

Marketing campaigns are increasingly being used by National Governing Bodies and other organisations to break down these social stigmas and encourage female participation. Sport England led the way with its ‘This Girl Can’ campaign, which reports to have seen an increase in the activity levels of 2.8 million 14 – 40-year olds across the country (5). The sheer scale of the campaign, with numerous ads designed to normalise activity and resonate emotionally with women of all backgrounds, enabled it to fulfil its promise to change perceptions, build confidence and ‘leave no girl behind’.

Since then there have been numerous other campaigns targeted at female participation. One example is the ‘Try and Stop Us’ campaign, launched by World Rugby in May of this year (see Figure 1). Featuring 15 inspirational women and girls with ‘unstoppable’ qualities from around the globe, one of its aims is to break down stigmas that women lack the strength or masculinity to play rugby. 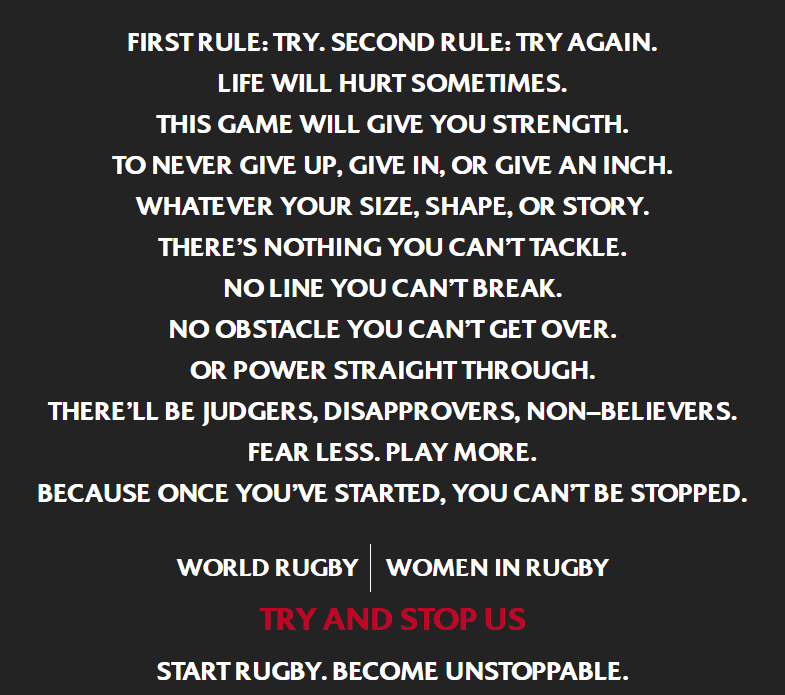 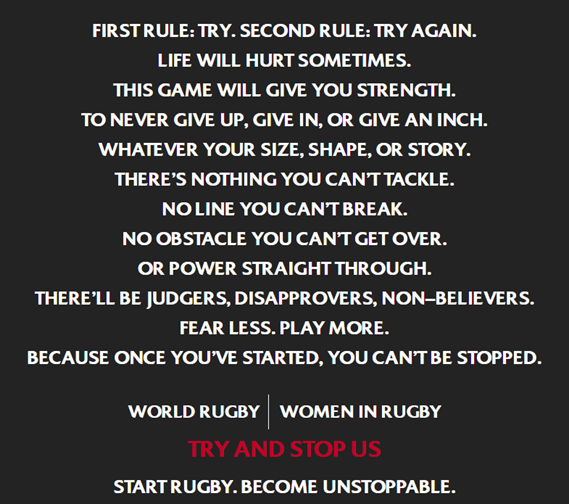 The campaign builds on the work done by World Rugby over the last two years in support of International Women’s Day 2017 and its #BeBoldForChange campaign. Among other initiatives, the Federation has worked to ‘drive inspirational leadership’ and ‘build an impact profile, breaking down barriers’ (6). Since then, more girls have started playing rugby than boys each year globally, a significant contribution to the 28% growth in registered players (7).

Facilities and infrastructure that encourage active behaviours are often less accommodating for women and girls. From an active design perspective, mixed or non-cubical changing rooms in both schools and leisure centres can make females feel uncomfortable or intimidated, thus preventing them from participating. Furthermore, environments that women wish to be active in are often perceived as unsafe. According to a survey conducted by England Athletics (2017), one in three females have been harassed whilst road running and over 60% of those surveyed said they feel anxious running alone (8). This could be attributed to a lack of safe pathways, green spaces or well-lit streets. It is important to focus on how the available environment plays a role in determining female physical activity levels, whether by developing facilities which allow them to feel comfortable or improving green spaces and other areas so that they feel safe.

One example of active design in action is the Besos River Park, located in a socioeconomically depressed area of Barcelona. The impact of its redevelopment was recently assessed through an ISGlobal study (9), which found that following the redesign – which included improvements ranging from wider cycle paths to security cameras – there was a 43% increase in the number of women using the renovated area. The number of non-Caucasian people using the park also grew from 3% to 8% of total users, thereby showing the power of active design in reducing both gender and wider demographic inequalities in participation.

While the gender participation gap exists across all demographics in England, there exists a particular imbalance amongst some ethnicities (see Figure 2).

There are various possible drivers behind this imbalance. Alice Dearing – the only black swimmer on Team GB – recently described how damage to afro hair may be a contributing factor to the low levels of swimming participation seen among black women and young girls (10). Another cultural barrier may concern the role of females in society. Our policy work in Mauritius, for example, found that the cultural significance placed on the matriarchal role in the home was one of the key drivers behind low female participation.

Our global participation work has identified various options for overcoming such cultural barriers. For example, in the Kingdom of Saudi Arabia we have supported initiatives ranging from policy change – such as inclusion of girls’ PE in the school curriculum and female gym licensing – to boosting the female sports workforce and redeveloping facilities to make them more female-friendly. Together, these initiatives have provided opportunities for women and girls to be active in an environment where they feel safe and won’t be judged. The latest National Sports Participation Survey (11) showed that adult female weekly participation has increased from 8% in 2015 to 22% in 2018 – a significant increase that can in part be attributed to the work done to address cultural barriers in the Kingdom.

Increasing participation amongst girls presents an opportunity to realise significant economic, health and social benefits. For example, closing the gender gap in London for 16-yr olds would mean an additional 160,000 females who are physically active, in turn contributing as much as £4.8M in healthcare savings to the economy each year (12).

Achieving such significant impact requires targeted interventions that tackle the underlying barriers facing female participation. Only then will we be able to level the playing field and realise equal benefits for all.