Over the last 100 years, we have lived through a period of unprecedented development that has doubled life expectancy and all but eradicated many killer infectious diseases. In 1900, global life expectancy at birth was just 31 years, by 2000 it had more than doubled to 76 years. Since 1988 the number of cases of Polio has decreased by over 99%. At the same time this development has freed millions of people from back-breaking physical labour. Good news, right?

Unfortunately, as economic development occurs, and GDP per capita rises and emerging sectors (manufacturing, ICT, finance etc) thrive, too often the sport and physical activity sector is left behind. The result? Sedentary lifestyles as physical activity at work and for transport purposes decreases which, when coupled with rising overconsumption, are precipitating growing health crises characterised by non-communicable diseases. 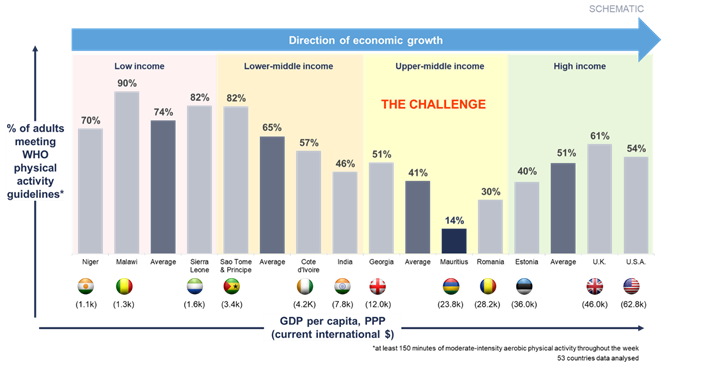 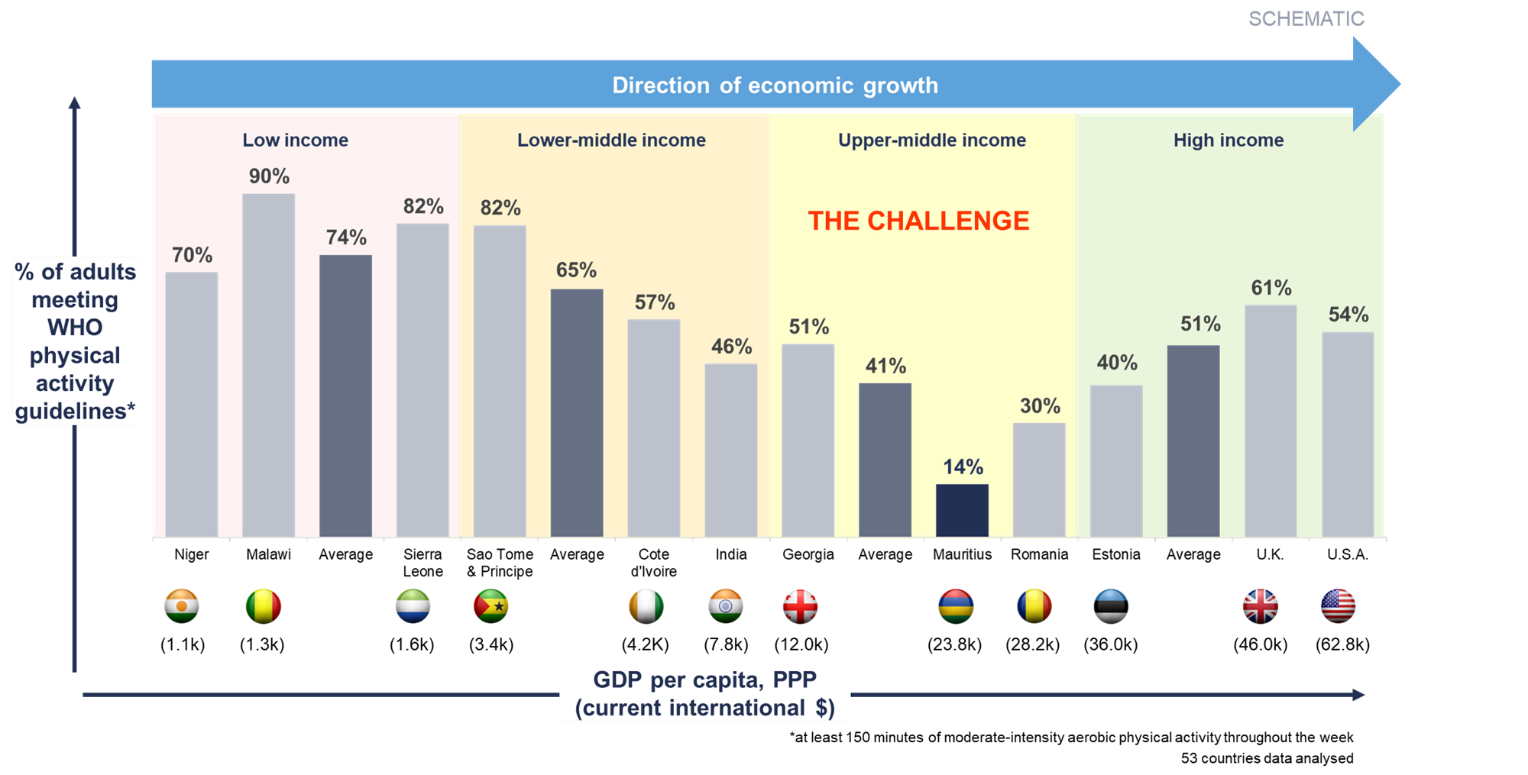 Mauritius - An island showing the world

This article explores how Mauritius is elevating sport and physical activity back to a national priority to address growing health and social issues. Mauritius now has the highest wealth per capita of any country in Africa – with GDP per capita having increased at a compound annual growth rate of 5.7% from 2001 to 2016. NCDs in Mauritius however have also dramatically increased over this period. 1 in 4 Mauritians now die as a result of Type II diabetes, a ratio higher than anywhere else in the world, and health expenditure is rising over 35% faster than the global average.

Over the past 18-months, the Mauritian Ministry of Youth and Sports have demonstrated how to address these issues through prioritising the development of the sport and physical activity sector. They have achieved this through simple and effective leadership, characterised by four key traits Visionary, Motivational, Collaborative and Role modelling.

Mauritius’ senior leadership’s first step was to acknowledge the importance of sport and physical activity to national development by committing to develop their first ever National Sport and Physical Activity Policy. This policy identified 20 strategic actions that government, sport and corporate organisations would jointly take to achieve the ambitious target of increasing the number of adults that meet WHO’s physical activity guidelines from 14% to 35% by 2028. This was supported by a case for change which demonstrated that the social, health and economic impact of achieving this target would generate a Return on Investment of 327% ($365M USD) over a ten-year period. Furthermore, to achieve this vision, the government created a new entity with clear accountability for delivering increased participation and empowered it through allocating it a 100% increase in budget compared to previous years. This simple combination of policy, target, case for change and accountability has catalysed the development of the sport and activity sector throughout the country.

Perhaps most critically, the national policy and its vision haven’t simply sat on a shelf. The Ministry of Youth and Sports has reached out widely, and repeatedly, to galvanise stakeholders through an inspiring narrative around “Heathier citizens, happier communities and a stronger nation”. Printed and promoted at any sport event, discussed over radio, TV, social media, delivered and explained to stakeholders through cross-ministerial working efforts, reinforced and advocated by senior government officials including the Prime Minister. Everywhere you look you can’t get away from the transformation Mauritius’ sport sector is undertaking.

Mauritius’ leadership has successfully engaged a network of domestic and global stakeholders to support the ambitious vision they have set. Mauritius’ growing global engagement is demonstrated by the support from the Commonwealth and potential international partnerships with international universities and the GSIC, powered by Microsoft. Locally, the joint venture between The Ministry of Youth and Sports and the Ministry of Health and Quality of Life to launch the nation’s first ever exercise referral scheme is just one example of increased collaboration. Through this process Mauritius has also seen growing international status and the emergence of several long-term partnerships both domestically and internationally. For the first time in their history Mauritius has been elected to the Commonwealth Advisory Body on Sport (CABOS). A focus on partnership and collaboration has been a key success factor in driving this change process.

Mauritian leaders ‘walk the walk and talk the talk’. The country’s leaders regularly take part in mass participation events. For example, The Prime Minister and Minister of Youth and Sports ran for an hour continuously, despite 30-degree heat! High-level Ministry employees have attended all 7 mass participation events organised in 2018-19 to show the way forward for the rest of the nation. Their adoption of healthier, more active lifestyles has provided consistent messaging to the public, staff and external stakeholders that is resonating with their fellow Mauritians. This has been reflected in a significant increase in attendance of mass participation events. For example, the Island’s premier trail race, with distances of 4 to 50 km, saw over a 200% increase in participants from 2018 to 2019.

It’s time to grow up

While the contributions of sport and physical activity to development outcomes are widely acknowledged, it is often not considered as a principal policy method by developing nations for delivering sustainable development. Mauritius can serve as an example for other developing nations who have fallen into, or are looking to avoid, the trap of a sedentary population and rising prevalence of NCDs. Countries should begin to follow their lead. To do so, they should develop sports policies, establish ambitious targets, and empower visionary, motivational, collaborative and role-modelling leaders to deliver on these.

What could we achieve if we could do this successfully? Convincing just 1 in 100 inactive people in India, a country following Mauritius into an upper-middle income economy, to cross the gap could lead to $2.2 billion of economic, health and social benefits each year.

So, now’s the time, let’s make the developing world an active world